“If there was an international nice-guy prize, David Wineland probably could win that too.  As it is, he’ll have to settle for the Nobel Prize in physics.” – Washington Post

I was honored to participate in the Symposium celebrating David Wineland’s 42 years of service to NIST on August 10, 2018.  It was great to see old friends and reminisce about the rich lessons in physics and humanity we learned studying under Dave.  The quantum world has a few less secrets. – Brad King

A nice tribute by David Kielpinski in Physics Today 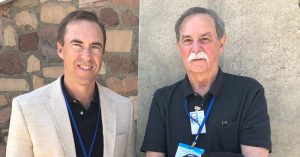